The manifesto proclaimed by the EXAT 51 collective put forth the belief that “there are no differences between “pure” art and “applied” art, we should look to attain a synthesis for all means of visual expression.” The group was formed in 1951 in Zagreb, three years after Josip Broz Tito decisively broke with Stalin and removed Yugoslavia from the Soviet sphere of influence and control. From that point on, Yugoslavia embraced a model of socialism based on principles of self-government. Theoretically, this policy applied to all areas life and was exemplified by state enterprises operated under the principles of self-management by their workers. These policies, along with a far-reaching modernization effort, sought to transform Yugoslavia into a true socialist democracy. Individuals who looked to integrate art, design, architecture and urban planning into a single area of visual studies were active participants in the creation of the socialist utopia of the future. One of EXAT 51’s founders was the architect Vjenceslav Richter – the group’s primary ideologist. Richter challenged the universal belief that dominated at the time that said that Abstract Art was a hermetic and elitist discipline, arguing that Constructivism was, in fact, a universal visual language capable of addressing the needs of modernity. Even though EXAT 51 disbanded after only four years of existence and a single group exhibition, its fundamental principle became not only the key to Richter’s career, but it also drove the development of the Yugoslavian Neo Avant-Garde. This new movement was notable for creating the New Tendencies forum for the international exchange of artistic practices and ideas. Richter was primarily interested in the idea of systems as sets of rules which programmed certain fragments of reality. In 1963 he began to develop the concept of “Synthurbanism,” which predicted that the lives of future socialist societies would function within groupings of architectural megastructures. The megastructures’ form was inspired by ancient Mesopotamia’s Ziggurat temple complexes. Each one of Richter’s envisioned buildings was to house 10,000 people and provide them with all the required amenities. The concept called for a city with a population of approximately 1,000,000 residents. Parks and other green spaces would fill the gaps between megastructures. Richter’s design was intended as a key element of Yugoslavia’s drive toward modernization: the creation of a fully self-governing society. The Ziggurat-inspired architecture did not constitute a system of closed forms and was, in fact, designed to be open to modifications implemented by their residents. In effect, the residents would have a degree of control over the shape of their environments. Richter was aware that his Synthurbanism project was primarily a creative exercise and not a realistic action plan. Still, he attempted to incorporate its fundamental principle of creating modifiable systems on a smaller scale. During 1963’s second New Tendencies exhibition held in Zagreb, he presented the first of his Relief-Meter series of systemic sculptures. It was made up of identical aluminum cuboids arranged into various configurations. The viewer was able to manipulate the sculpture by pushing or pulling the blocks. In this manner, the individual was able to independently create a work of art while operating within an externally-imposed system. Richter was interested in the means of programming the processes used to create the works while ensuring there was an infinite combination of potential outcomes. For example, his series of colorful Systematic Prints were always made up of 3,600 squares (either solid-colored or outlined). Each print consisted of four matrices of 900 squares each, with every fourth of the 3,600 squares shared between matrices. The pattern of squares in each was the result of a different set of programming rules. In order to maintain the system’s capacity for change, Richter allowed each matrix to be rotated by 90 degrees, which resulted in an entirely new visual effects. Richter believed that his small-scale visual studies would assist in the development of systemic solutions for design, architecture and urban planning of the future.

Vjenceslav Richter (1917–2002) was an architect, sculptor, painter, graphic designer and art theorist. He served as the director of the Centre for Industrial Design in Zagreb. He also   designed the Yugoslavian pavilion at the 1958 Expo in Brussels, and the exhibition pavilions in Turin and Milan. His modernist buildings were a subtle voice of support for the political vision of a self-governing Yugoslavia. He was also the architect of Belgrade’s never-completed monumental Museum of the Revolution. Later in his career he focused on creating sculptures, paintings and prints. In the 1970s he began using computers in his creative processes. The primary subject of Richter’s works was the functioning of visual systems and the potential for developing open-systems of programmable art. 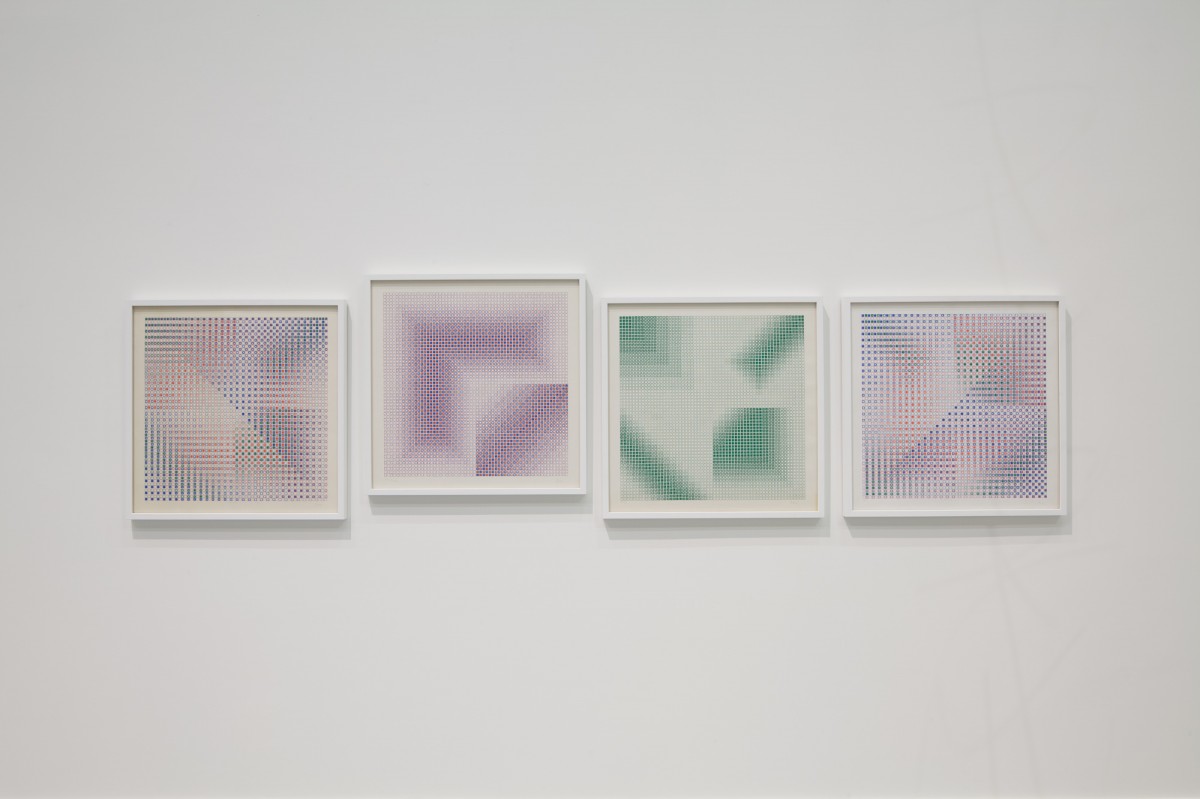