Op art is often seen as the art of visual tricks – more concerned with entertaining audiences than inspiring them towards deeper reflection. Victor Vasarely, by far considered the father of the style, wanted artists to reach a broader audience, however the driving force behind his artistic practices was the discovery of the mechanisms that governed visual perception, not entertainment per se. While he based his works on the form of optical illusions, Vasarely’s aim wasn’t to trick audiences via  tricks of perception, but, rather, to reveal how the act of visual processing impacts the way we see reality. He held a deep fascination for the theory of perception formulated by the founders of Gestalt psychology. Vasarely’s early works analyzed the relationships between an image’s individual parts and the whole, which wasn’t merely the sum of its parts. Towards the end of the 1960s, he created a series of paintings inspired by Gestalt theory, in which he examined the visual perception of impossible objects. The perception of the whole changed depending on the perspective assumed by the viewer, and a sense of confusion ensued. Vasarely considered himself to be the next line following Kazimir Malevich and Piet Mondrian with regard to his approach to visual studies. In his Yellow Manifesto, published in 1955, Vasarely argued that the traditional division of the arts (into painting or sculpture and the like) should be done away with. He claimed that the avant-garde had altered the essence of art by substituting various forms of “plastic” art with a study of rules that constituted a definition of reality within the act of looking at something. These analyses, while carried out in various types of settings, took up the very same issues. Here, Vasarely was most interested in the way the eye recognizes motion in a static work of art, spatial depth in the surface of a painting or the bounds of individual forms, particularly when determining what is perceived as the figure and what is the background. These ideas are present even in his early figurative works such as the Zebras series, in which he limited his means of expression to an alternating pattern of black and white stripes that covered the painting’s entire surface. The shape of the animals’ bodies was revealed through subtle irregularities in the pattern of stripes.

Vasarely later shifted his focus towards geometric abstraction. He sought to develop a carefully defined Plastic Alphabet by way of his works. Over time, the alphabet’s forms evolved. In some instances, Vasarely limited himself to black-and-white monochrome and a specific range of shapes. In others, he used a select color palette to paint a repetitive form in certain arrangements which could successfully produce the illusion of a three-dimensional structure. This alphabet came with a set of “grammatical rules” that determined possible uses for each individual element and the ways in which they could be combined. Each one of his works was preceded by a series of preliminary technical drawings and sketches. Vasarely’s method reflected his fascination with technology and the scientific method – the Plastic Alphabet and its applications call to mind today’s use of software in creating works of art.

Victor Vasarely (1906-1997) was a Hungarian visual artist and one of the leading members of the Op Art movement. Throughout his life, he was fascinated by theories of perception and visual perception heuristics. He studied at Sándor Bortnyik’s private art academy in Budapest. Bortnyik, a painter and graphic designer, was inspired by Bauhaus practices and philosophies. After completing his studies, Vasarely emigrated to Paris where he began working for advertising agencies, designing promotional posters. Throughout his artistic career, he sought to find his own voice. His initial focus was on figurative art, until he was swayed by the artistic practices of Kazimir Malevich. Ultimately, he set his sights on the study of optical illusions. In 1955, he took part in the groundbreaking Le Mouvement exhibition of Kinetic Art at the Galerie Denise René in Paris. Victor Vasarely’s art was the fruit of multiple visual languages programmed to compose infinite permutations of form and color. 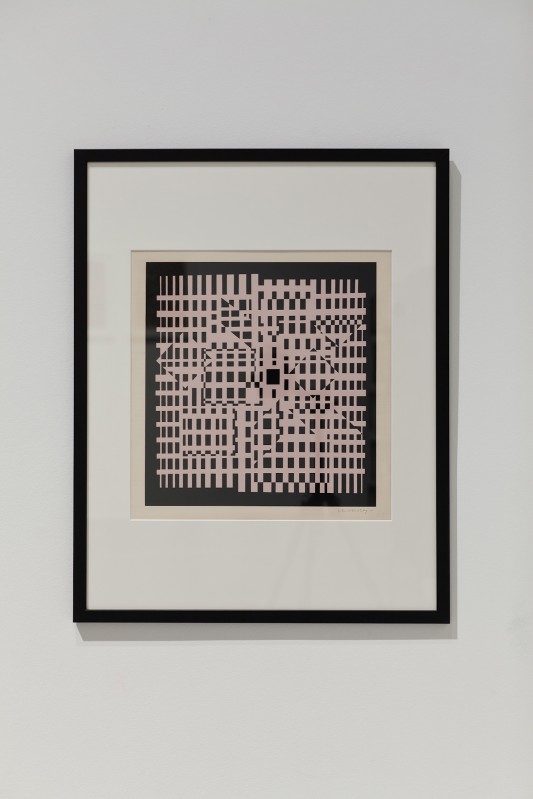