The aim of Nicolas Schöffer’s artistic practice was the complete liberation and automation of sculpture. The artist referred to his research in this area as “spatial dynamism.” Unlike other artists associated with Kinetic art, Schöffer was not content to simply install electric motors into his works, but he also designed special systems which gave the objects the ability to autonomously control their own movements. In 1956, he created what he claimed to be the art world’s first cybernetic sculpture – the CYSP 1 (however, most scholars concur that the first such sculpture was in fact László Moholy-Nagy’s Light-Space Modulator of 1930). Schöffer’s sculpture was a two-and-a-half meter tall, irregular aluminum framework with 19 multi-colored round and rectangular flat metal elements which rotated around their own axes at varying speeds. The framework was attached to a cylinder containing wheels and a set of electric motors which powered the movement of each of the 19 rotating elements ,as well as that of the entire sculpture. The system was governed by an artificial “brain” – a small computer which regulated the operations of the motors through an interactive system based on data received through a feedback-loop. The data was then fed to the computer through built-in microphones and photoelectric cells which registered sounds and movements in the vicinity of the sculpture. The data obtained from these sources affected the movement of the entire sculpture as well as that of the colorful moving elements attached to it. The sculpture was able to respond to changes occurring in its environment and actively modify its actions based on the data. Schöffer believed that technology was the key to freeing art from the dictates of subjective expression and replacing it with an objective set of rules generated by cybernetic systems. His desire was to see sculpture integrate the experiences produced by other media such as films, painting and choreography. In the search for such integration, the CYSP 1 performed a role in a dance performance held on the rooftop terrace of Le Corbusier’s iconic Cité Radieuse housing block in Marseilles. Schöffer also created works of art which utilized moving mirrored surfaces, which were illuminated with multi-colored lights to create dynamic, abstract visual projections on walls. In his art, cybernetics became a tool which amplified the aesthetic experience while expanding art’s reach beyond the gallery space into the urban fabric. The concept of integrating art and technology into everyday life was also the subject of his book Cybernetic City. Its pages contained designs for numerous projects, including cybernetic towers – several of which were built. The largest was the 56-meter-tall tower in Liège, Belgium. Schöffer equipped it with an assortment of microphones which recorded the city’s ambient sounds. These recordings were then played back through the tower’s speakers providing the soundtrack for the choreographed movements of its structural elements and illuminations. In turn, the motion of the tower’s elements and illumination patterns were adjusted in response to data sent to its operating system by a set of sensors measuring humidity, wind speed and temperature. Schöffer’s extended his creative ambitions even further: he produced a sketch for a new interactive tower in Paris, whose scale matched that of the Eiffel Tower.

Nicolas Schöffer (1912–1992) - was a Hungarian-born visual artist who resided in France. He began pursuing his interest in integrating Kinetic art with cybernetics in 1948. The computers which governed his sculptures’ “reactions” operated on the basis of feedback loops which allowed the artworks to automatically regulate their responses based on changes in their environment. Schöffer’s works challenged the traditional dichotomies between subject and object, artist and artwork. He claimed that his constructivist works provided abstract art with full autonomy to create itself. 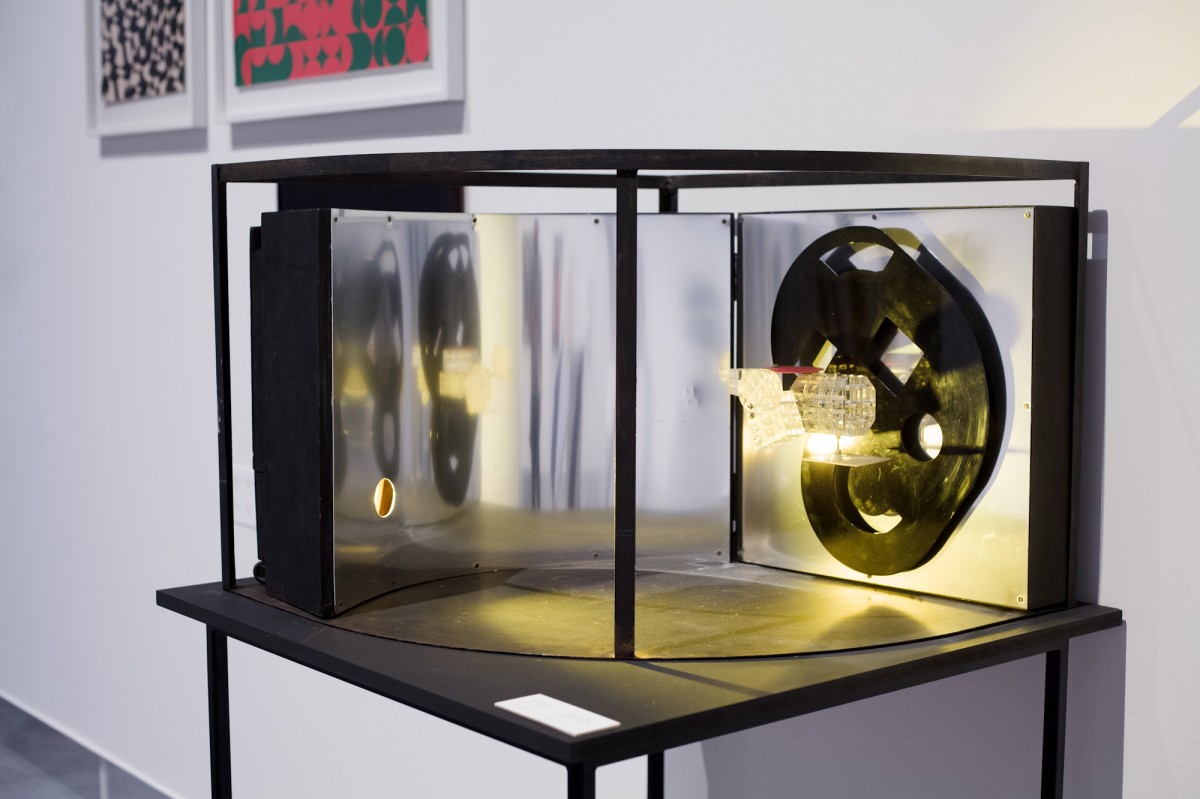