During the 1960s, Polish sculpture experienced a revival once the imposed Social Realist doctrine was abandoned. As a result Polish artists were free to experiment with abstract art. They began to view their works as part of a larger context with regard to the concept of spatial arrangment developed prior to World War II by Katarzyna Kobro and Władysław Strzemiński. Sculpture moved away from its conception as a free-standing form meant for gallery exhibitions or figurative statues to become an integral part of the urban environment, a spatial form engaged in an active dialogue with the surrounding architecture. One of the key events in the development of this modern conception of sculpture was the 1965 Biennial of Spatial Forms held in the city of Elbląg. The event was the brainchild of Gerard Kwiatkowski, an artist employed at the Karol Świerczewski Zamech Mechanical Works in Elbląg, and Marian Bogusz, the co-founder of Warsaw’s Krzywe Koło gallery. Magdalena Więcek was an artist involved in developing the concept behind the Biennial, which called for groups of artists to hold residencies in Elbląg for several months to work on extended projects. Together with workers from the Zamech plant, artists would develop sculptural projects for specific locations in urban settings. Most of the artwork was to be made out of metal, which was the factory’s main output. The collaborative aspect of their work, along with their particular approach to the arrangement of space, was intended produce an evolving sense of social consciousness. In the first week of the biennial, Więcek created Detachment / Structure, a  sculpture that consisted of three vertical pipes with bent sheet metal elements attached at the top in three clusters. This dynamic construction created the impression that the levitating metal elements were orbiting around the central framework, driven by centripetal force. Many years later, Więcek recalled that thanks to her experiences over the course of the biennial residencies, she gained an understanding of metal which allowed her to incorporate the theme of movement into her sculptural structures. At the second Biennale, she created the Ascent / Spatial Composition. Initially, the structure was meant to be located near the Olimpia sports club stadium. Her research led her to study the geometry of ball flight, inspiring the placement of two spherical shapes on a steel framework. Eventually, the piece was installed in front of the city’s railroad station before being placed in the courtyard of Galeria El during the 1990s. In her Muzyka, która mogła powstać, the music journalist Dorota Szwarcman recalled an amusing anecdote related to the sculpture, which took place during the 14th Warsaw Autumn Music Festival in 1970. The event was attended by the composer Karlheinz Stockhausen and, acccording to Szwarcman’s account, following one of the concerts Stockhausen joined other artists at Magdalena Więcek’s studio in Warsaw’s Mokotów district. As the night went on, together they began to make music by striking the spherical metal elements of a replica of the piece, which was on show in Więcek’s studio.

The Biennial of Spatial Forms was a unique initiative which swiftly gained international renown. In 1967, Więcek, along with three other artists (including Marian Bogusz), was invited to create spatial forms in the Danish city of Aalborg. On a small hill sandwiched between housing blocks, Więcek installed Florale, a sculpture made up of several steel discs suspended on a light-weight steel framework. In addition to creating sculptures intended for specific urban spaces, Więcek experimented with similar smaller-scale projects, such as the Ascent series, consisting of a series of stacked semi-spherical brass elements (both solid and hollow). The dynamic arrangements composed a three-dimensional snapshot of objects in motion.

Magdalena Więcek (1924 – 2008) was one of the most renowned Polish sculptors. Her public art can be seen across Poland, Denmark, Germany, The Netherlands and Italy. During the 1950s, her work reflected the doctrine of Socialist Realism, but after the end of the Stalinist period, her art gradually shifted away from the figurative toward abstract expressionism. In the 1960s, she embraced light geometrical forms which engaged their surroundings, as well as small-scale works which experimented with the sculptural potential of steel, aluminum and bronze. She died during a 2008 family trip to Egypt. 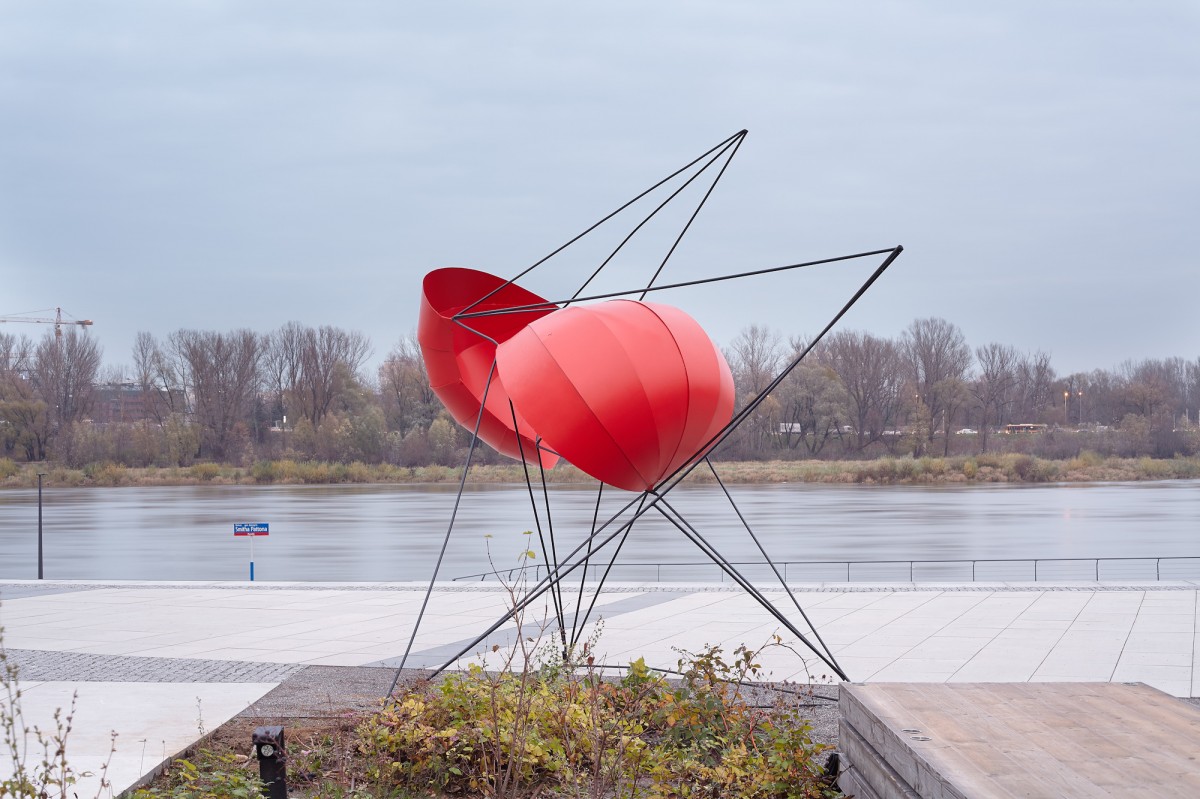