​In 1965, as part of the first Biennial of Spatial Forms in Elbląg, Jerzy Jarnuszkiewicz presented his Road Sign Composition – an 8-metre high geometric structure made up of metal sheets set at varying angles and arranged into an oval shape. Today the sculpture stands at the city’s Słowiański Square, illuminated by a spotlight, which amplifies the interplay among its individual elements. Later that same year, he created Sails II – a sculpture made of  twisted and melded sheets of metal, combined into a geometric abstraction that appears to imitate the dynamic relationship between the obstinate matter of a sail and the wind effecting its power upon it. These two works were created during a period of intense pursuit for new forms of expression. The greatest problem Jarnuszkiewicz came across in his art was discovering how subjective emotions could be relayed through the creative process. His abstract, rationalized spatial compositions came about at the intersection between his personal opinions on art and his fascination with the works and actions of Oskar Hansen. He and Hansen both worked in the Sculpture Department of the Warsaw Academy of Fine Arts. At the end of the 1950s, they collaborated on a revolutionary project for a new, revolutionary memorial concept for the Auschwitz-Birkenau Museum to commemorate victims of the Holocaust. Jarnuszkiewicz conceived the idea, which called for a symbolic negation of the area of the camp by putting a diagonal line through it. The line would take the practical form of an asphalt road, which would lead visitors through the grounds. The project was ultimately deemed too radical and never carried out. This wasn’t the end of their collaboration, however, as both artists took it upon themselves to revive the outdated curriculum taught at the academy. Jarnuszkiewicz revolutionized the practical formula for the most important component of the course – the nature study. His approach called for the artist to formulate a problem, set down a timeframe for its realization and the materials that would be used. His goal was for students to practice independent thinking, to create their own, individual forms of artistic expression, and to open up to their own emotions and perspective on reality. His remarkably unique pedagogical method was further developed by his student and assistant Grzegorz Kowalski. Towards the end of the 1960s, Jarnuszkiewicz began experiencing a creative and spiritual crisis, he abandoned geometric forms and returned to the expressive figurative sculptures of his early career, with their religious and metaphysical themes.

Jerzy Jarnuszkiewicz (1919 – 2005) was a sculptor and author of concepts for memorial sculptures, spatial compositions and informal sculptures, medals and bookplates. His artistic practice can be divided into several formally distinct periods. At first, his figurative and expressive sculptures focused mainly on themes having to do with war. It was during this period that he made his most famous public work,  Mały Powstaniec (Boy Soldier) on commission for the Ministry of Culture and National Heritage in 1946 as a memorial to the child soldiers of the Warsaw Uprising of the Second World War. This small-scale sculpture was reissued as an official monument and placed in the Old Town district of Warsaw in 1983, in spite of certain objections Jarnuszkiewicz had to the idea. In the 1940s, he continued to work on military-themed works, along with taking on a role in the Office for Capital Reconstruction, under the brilliant modernist architect Bohdan Lachert. He was responsible for art planning in buildings that were under construction in the demolished capital. He experienced a brief moment of fascination for social realism, during which he devised the monumental façades of the MDM in Warsaw, featuring the larger-than-life reliefs of the steel worker and teacher.  During this period, he also made several sculptures inspired by the work of Henry Moore, such as Two and Rowers. A pivotal moment in his career was the moment when he picked up metal sheeting as a sculptural material, which he used to create expressive works like Suki or the geometric-analytical Spatial Composition. In the final years of his life, he devoted himself mainly to sacral sculpture and monumental works, such as the monument to John Paul II and Cardinal Stefan Wyszyński on the grounds of the Catholic University of Lublin. 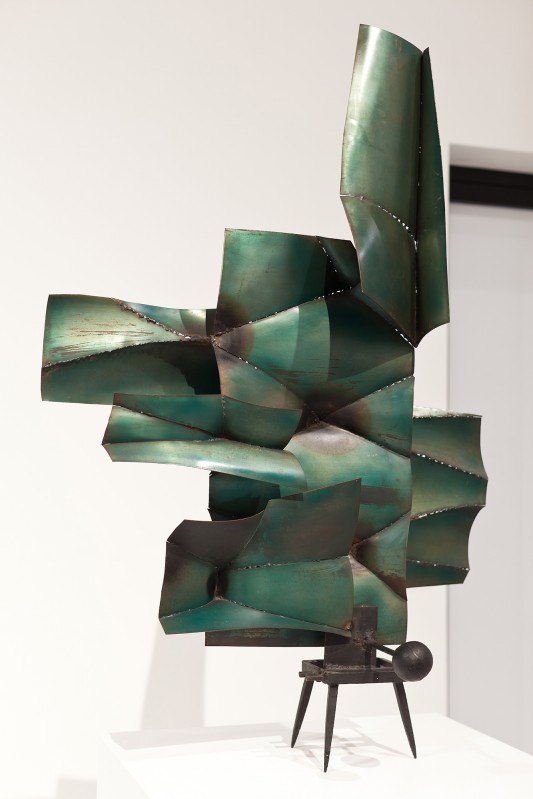