In Russia under Stalin, art practices inspired by the pre-war avant-garde were banned, and the socio-realist style instated as the official canon. It wasn’t until after Stalin’s death, when the thaw set in, that artists began turning towards the past in pursuit of a new form of expression. Artists most frequently looked to the aesthetic aspects of abstractionism, treating it as a form of protest against the imposition of the figurative style. The “collective of free artists,” who later came to form the Dvizhenie group, looked down another path altogether. They weren’t interested in replicating existing styles or fitting into a certain canon. For them, the purpose of their artistic practice was to rethink the task at hand, the obligations that the historical avant-garde had set up for itself, along with finding ways of working through projects related to its utopian ideas. What was especially important for them was that their message was current with regard to the moment in which it came about, which is why they chose kinetic art as one of their main tools. This is evident in the choice of name for the group (dvizhenie meaning “movement) which most readily described the scientific-technological race driven by the atmosphere of the Cold War.

At start of the 1960s, a number of young experimental artists began to convene at a small room in a communal apartment on the outskirts of Moscow, which belonged to Lev Nussberg and was filled with a sizable collection of illegal literature on psychoanalysis, continental philosophy, futurist poetry, albums featuring images of western art and jazz records. Fresh out of the art academy, Nussberg abandoned his early interest in Picasso to pursue his own research into the dynamism of geometric forms. His early works were made of fiber boards painted different colors. He was interested in the concept of symmetry, which he considered a cosmic phenomenon allowing for various elements to coexist in a single composition. It was early in his career that he realized that his geometric constructions, made of crushed eggs cartons and such, shouldn’t just take up the issue of movement in theory, but in practice. The elements of his works began to move around, as did the artist himself as a participant in his own kinetic performances. Eventually, collectively produced industrial optical-reflective sculptures and installations weren’t just moving around their own axis, but they were integrated in his performances and choreographed spectacles. In the meantime, the charismatic Nussberg managed to convince his buddies at the academy to join his collective. One of its new members was Fancisco Infante, who was a few years younger than Nussberg. Infante’s approach to the dynamics of geometric forms diverged from the way Nussberg saw them. Infante was fascinated by the idea of infinity, which he considered beyond its cryptic guise as a supernatural phenomenon and, rather, as a phenomenon of movement in space. Hence, in his works, he had a tendency to replicate the same geometric forms multiple times on a varying scale, particularly in his kinetic installations.

These artists used aluminum, plexiglass, mirrors, lightbulbs and other industrial materials, which gave rise to the interpretation of kinetic art as a form of futuristic design. The artists themselves wanted their work to be set firmly in the quotidian, which is why the group took on public projects, such as the decoration of the boulevards and squares of Leningrad of the 50th anniversary of the October Revolution. Many saw it was another instance of the regime inflicting its ambitions upon its artists and it led to several schisms within the group. In addition, some artists, like Infante, were irritated by Nussberg’s dominating personality. In 1966, Nussberg published his Manifesto of the Russian Kinetists, which set the foundation for a scientific-technological revolution that would change the world. Most of the collective’s members didn’t sign the manifesto, distancing themselves further from Nussberg and the group. Dvizhenie ultimately fell apart in 1976, when Nussberg emigrated to Germany, then to the United States.

Lev Nussberg (born 1937) is a pioneer of kinetic art in Russia and founding member of the Dvizhenie group. His practice included drawings, sculptures and installations, along with performance art pieces in which dancers performed choreography around his sculpture-machines. He believed that his work was fueled by a experiences that would one day be shared by the technologically-advanced societies of the future. His most ambitious project was an idea for the creation of an “artificial bionic-kinetic environment,” a utopian metropolis made of homes that were built like geodetic spheres like those built by Buckminster Fuller, and public squares where the temperature, sound and smells could be adjusted by a control panel.

Francisco Infante (born 1943) is a graduate of the Moscow Institute of Functional and Decorative Art. In the years 1966-1973, he was a member of the Dvizhenie group and a major representative of kinetic art from Russia. His geometric sculptures and installations were made of materials typically used in functional and industrial design. He was fascinated by the concept of integrating art and design. After butting heads with Nussberg, he left Dvizhenie and began working on independent projects, together with his wife Nonna Goriunova. One of his most well-known works is realized since 1976 a series of photographs titled Artifacts, which depicted his reflective sculptures set within a natural landscape. These objects disappeared into the background as they reflected their physical aspects, while also creating new geometric forms within the space of the image. 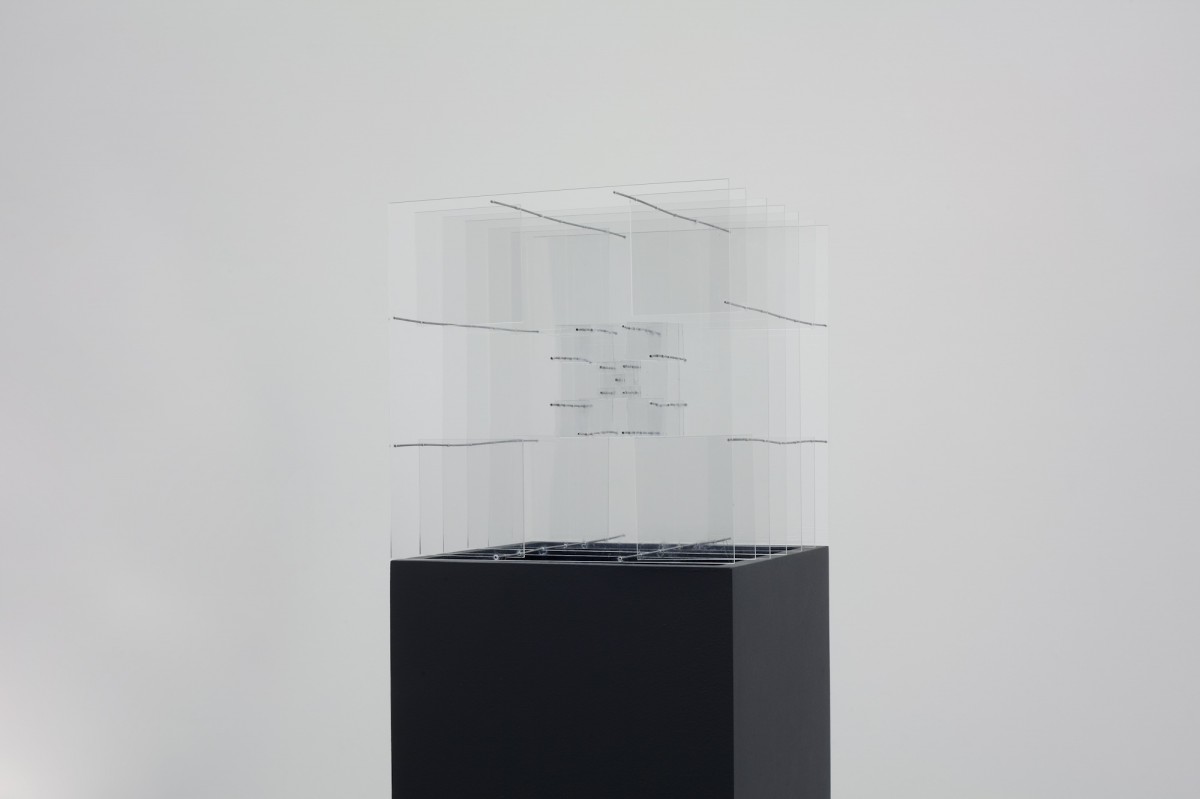